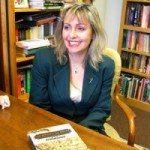 Sabine Hyland is an anthropologist and ethnohistorian her work explores the little-known cultures of the Andes, both past and present. Her research has taken her to remote mountain villages in Central and Southern Peru to meet with native community leaders as well as with local healers and diviners. She also investigates archives in Peru and Spain, analyzing 400-year old manuscripts for the information they reveal about the Inka past.. Read More

http://www.psupress.org/books/titles/978-0-271-07122-0.html How does society deal with a serial killer in its midst? What if the murderer is a Catholic priest living among native villagers in colonial Peru? In The Chankas and the Priest, Sabine Hyland chronicles the horrifying story of Father Juan Bautista de Albadán, a Spanish priest to the Chanka people of Pampachiri in […]

Just returned from my latest field season in Huarochiri Province, Peru, funded by Nat Geo. Although it was difficult fieldwork, with numerous setbacks, I was able to work in three remote communities who had used khipus well into the 20th century, all previously unknown. I found seven new Inka style patrimonial khipus with a total […]

My husband, Bill, and I have been awarded a grant from the National Geographic Global Exploration Fund, to document two patrimonial khipus still used by a remote community in the Peruvian Andes. We will travel there this year to study the knotted texts.