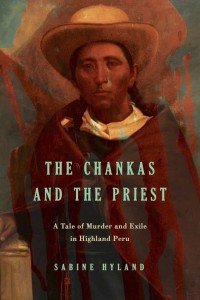 The Chankas and the Priest: A Tale of Murder and Exile in Highland Peru

How does society deal with a serial killer in its midst? What if the murderer is a Catholic priest living among native villagers in colonial Peru? In The Chankas and the Priest, Sabine Hyland chronicles the horrifying story of Father Juan Bautista de Albadán, a Spanish priest to the Chanka people of Pampachiri in Peru from 1601 to 1611. During his reign of terror over his Andean parish, Albadán was guilty of murder, sexual abuse, sadistic torture, and theft from his parishioners, amassing a personal fortune at their expense. For ten years, he escaped punishment for these crimes by deceiving and outwitting his superiors in the colonial government and church administration.

Drawing on a remarkable collection of documents found in archives in the Americas and Europe, including a rare cache of Albadán’s candid family letters, Hyland reveals what life was like for the Chankas under this corrupt and brutal priest, and how his actions sparked the instability that would characterize Chanka political and social history for the next 123 years. Through this tale, she vividly portrays the colonial church and state of Peru, as well as the history of Chanka ethnicity, the nature of Spanish colonialism, and the changing nature of Chanka politics and kinship from the fifteenth to the eighteenth century.

My latest field season in the Andes! New Discoveries about Khipus!
Scroll to top